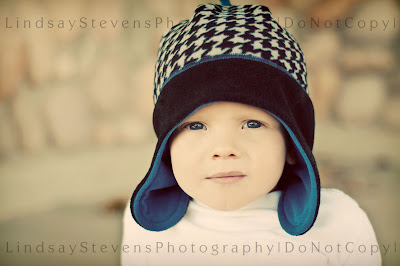 I just had to post this photo of Cam....
I ordered this hat for Drew and Cam's been wearing around the house all day long. He looked so cute, so of course I had to get some pictures of him. I just love how his eyes are so penetrating. It was the last picture by the way. I got some other cute ones...but this one was the best. It's just shows that being patient is an important part of photography ;)
Posted by linds at 10:36 PM 5 comments: 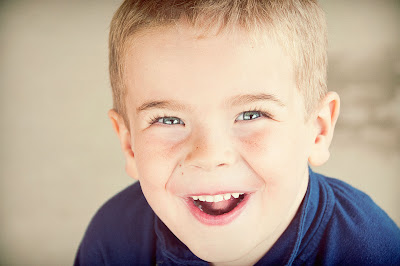 What is it about boys that they feel the need to shoot stuff, slice and dice, and generally cause mass destruction? My mom gave me the Toys R' Us big toy magazine a couple of days ago and I told Drew we could go through it and he could circle what he would like for Christmas. Well, he wants a gun, a sword, a Ultimate Fighting set with fighting figurines. To name a few... So, me being the mom wondering why boys are like this asked Drew, "bud, what is it that you like about guns and swords?" He said, "Because swords make blood come out and guns blow stuff up." Ok, maybe I'm just being too dramatic but WWHAAATTTT?!??!!!!!!!!!!!! We don't watch violent stuff at our house. They watch disney movies, Thomas the Train and Bob the builder and Living Scriptures. Where did I go wrong? So, I told Drew that I don't know if it's a good idea to have guns and swords in the house if that's what he likes about them. I told him even pretending to hurt or kill somebody is not a good idea. I know he's only 5, and he's a boy. I certainly don't want him playing with barbies or dolls or something, but COME ON! Should I get him the gun, figuring that it's just going to happen someday anyway? Or should I find alternate ways for him to have fun. I'm for plan "B" but was hoping any other ideas that find their way into my comments either help me cement my decision or just tell me to calm down and stop being so dramatic...Mom's of boys.... HELP!!!!!
Posted by linds at 11:53 PM 3 comments:

Halloween this year was great. We made pumpkins a few days before-I wish we would have been more on the ball with that one. We watched the NBC Monsters and Aliens Halloween special, the boys watched about 5 times.
I Drew a face on Cam's pumpkin and then gave him some markers and told him to have at it. He had a great time coloring his own pumpkins. The only downside was his self-appointed ownership of ALL the pumpkins. At least 5 times a day I would find him outside rearranging the pumpkins to how he thought they should be. 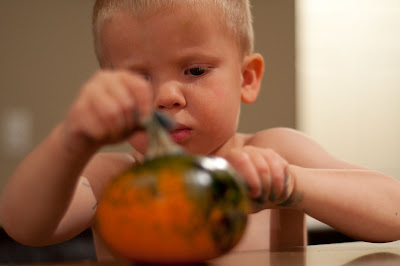 The pumpkins we made: 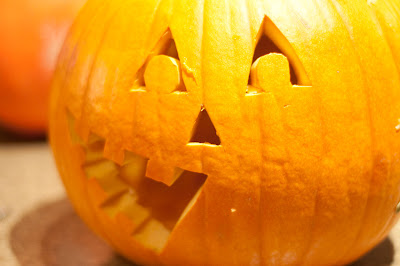 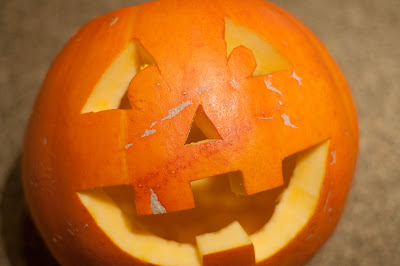 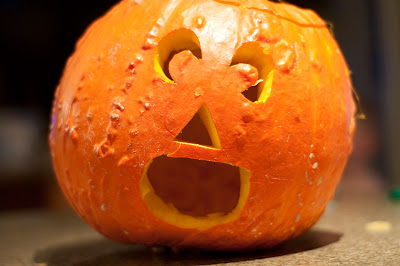 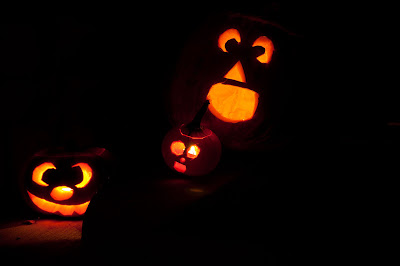 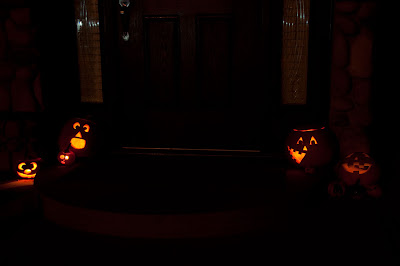 I actually took this one for an assignment for a photography group that I'm a part of. The assignment was fear. I made this photo by zooming my lense in and out during a long exposure-1.5 seconds I think. Kinda cool huh. 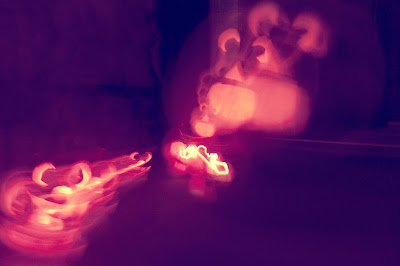 This year, we decided to pass out candy. The first time in our entire marriage. In the past we've gone to both of our family's houses and neighborhoods. We really wanted to stay home and enjoy this neighborhood type of holiday. We're glad we did, it was fun walking around with our neighbors and the kids LOVED running from one doorstep to another with their friends. We have an awesome ward and neighborhood-I'm so glad to be here.

My cute little Captain Jack Sparrow (Drew still can't say that name, and I WISH that I could write down what he's saying, but I have no idea what he's saying) and Buzz Lightyear..."To Infinity and Beyond!!! 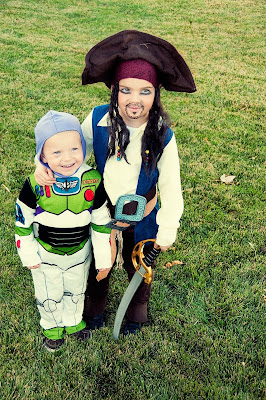 The serious shot, before taking off ;) 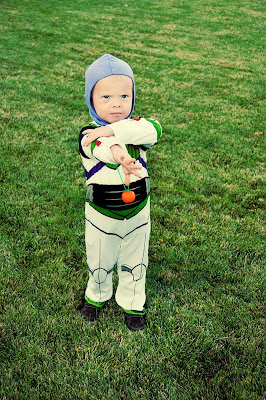 There's my boy! It's taken 2 years 22 months 19 days and 10 hours for this kid to actually smile for the camera. Sheesh dude!! 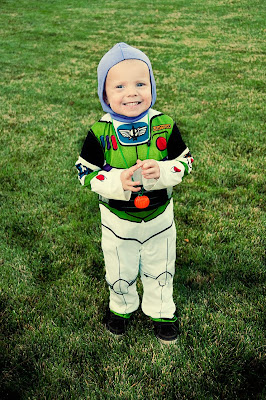 I love this shot of Cam climbing up to get his loot :) 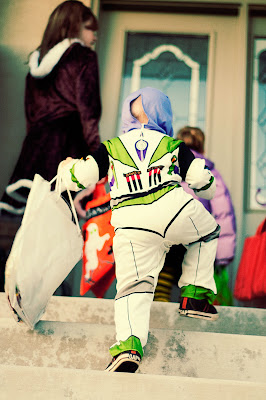 And another. He would RUN from house to house, and would ask for more than one piece of candy. It worked, because he came home with almost twice as much candy as drew...what a little stinker. 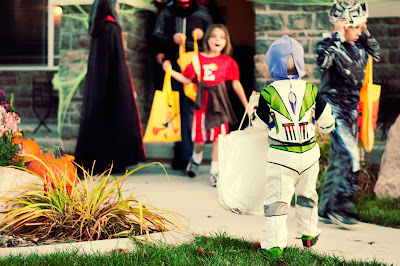 Can I just say how much I love this picture. I'm tempted to blow it up and hang it in my house...I love the intensity in his eyes and his facial expression. I asked Drew at some point during the summer what he wanted to be for Halloween. Pirate-he didn't even hesitate! Here he is and loving it!! 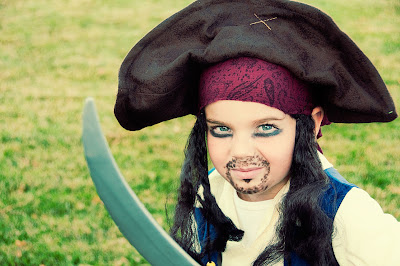 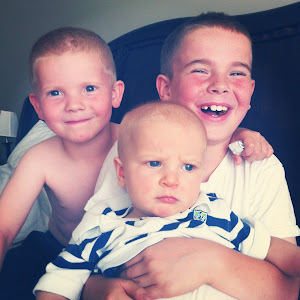 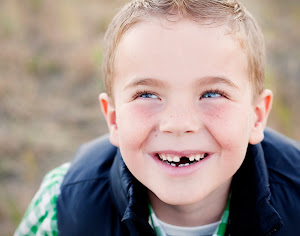 My big second grader! Drew LOVES soccer, riding bikes and scooters, playing with his brother Cam and friends and watching movies. He works so hard on his cello and is becoming an excellent reader. He's so helpful around the house. We love our Drew! 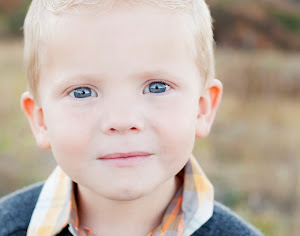 Cam is almost 5! He is my creative, fun-loving, sweetheart. Cam loves anything creative-crafts, coloring, puzzles. He loves to play with his older brother Drew and with friends. He started violin lessons this year and is doing fantastic. He's such a handsome boy, with amazing blue eyes. We love our Cam!

My almost 1 year old! He is our crazy, silly, funny and random little boy. We sure love him!